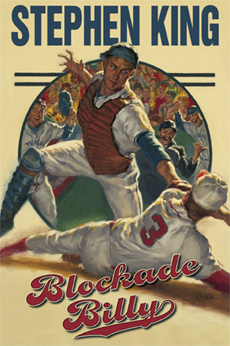 Once again King has surprised us. Out of nowhere it was announced that Blockade Billy was being released in less than a month after the announcement was made. I have read the book and compared to King’s last book, Under the Dome, its length can only be described as that of a foreword. Blockade Billy is only 112 pages (plus one illustration) but it’s as good as its short.

The book tells the story of William Blakely who in 1957 arrives to the New Jersey Titans as a stand in for an injured player. There’s no one that really believes that Billy will make a deferens but boy are they wrong. Billy turns out to be a very good player and most of the time he does what he’s supposed to do and the team accepts him even though he is a bit strange. He talks to himself, refers to himself in third person and most of the time appears to be totally clueless to the fans admiration of him. But Billy has a dark secret. A secret that in the end erases him from all history books and, as his team, today he is forgotten.

As usually King is great in telling a simple story. When I read about Billy’s dark secret prior to reading the book I got the impression that the secret would be somewhat supernatural. That he had sold his soul to the devil in return for being a great baseball player or something in those lines. That is not the case however. Nothing in the book is supernatural. It could in fact be a true story.

The story is told first hand by George Grantham, or Granny as everyone calls him, to none other than Stephen King himself. King’s role in the story is very small though. The only mention of him is that Granny addresses him as Mr. King when he tells the story but that is it. A rather nice twist if you ask me. I read the book in two sittings (had it not been late at night I would have read it all in one) and one or two sittings it probably the best way to read this book. It’s short and has no natural breakpoints or chapters so it’s really a one-read-story if there ever was one.

The game in the book is baseball and even though I live in Sweden, where we don’t have baseball, and know nothing about it, it’s not a problem. King has minimized the use or rules and baseball terms and the baseball is more the setting then the story itself so that causes no problem. The story is where the focus is and let me tell you; it’s a good one. The characters are well described and we get to know them quite well, for the short time we spend with them. Blockade Billy is once again King at his best, this time in the shorter format.

With the book you also get a baseball card of Billy and even though I have no clue to who’s on the picture he does look familiar don't you think? 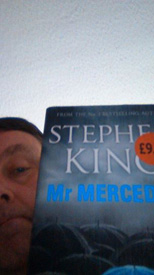