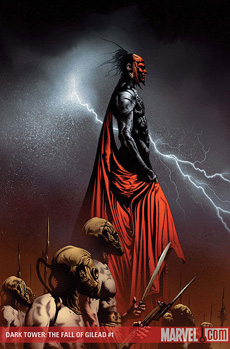 The forth story arc is here and it has gotten the dramatic title Fall of Gilead. And it sure starts with drama. Roland finds himself next to his dead mother, killed by no other then Roland himself. Steven realizes who has betrayed him and when he does, even though it’s his wife, he means to make her pay for it. When he finds her though she already have and, before knowing who has done the deed, decides her killer will pay!

We also get to see another of our friends meet his faith in this issue. Fooled by his enemies he unknowingly falls for their trick and ends up getting poisoned. I won’t tell you who it is, that you deserve to find out yourself but I will tell you that you’ll be sad to see him go…

It’s nice to be on the move again and I think that Fall of Gilead will be a very interesting story arc with a lot of sadness but also a lot of explanations about what’s happened in Roland’s life before me meet him in the books. This issue (and the rest in this story arc) is also illustrated by Richard Isanove instead of Jae Lee and because of that the characters look a bit different then we‘re used to. Personally I don’t mind that much but it’s a bit confusing at first.

The text material in this issue is all written by Robin Furth and is about her feelings about this story arc and Roland’s faith in general. As usual she writes very well and it’s an interesting read. A comic version of her is also popping up on the pages (not in the comic though) as an extra future and I have to admit that I wouldn’t mind turning up as a fellow gunslinger myself…

We also get more sketch versions of the pages. This time we get to see the really early once and I must admit that they are quite interesting. It would be fun if there were a special for one issue where the pages where entirely in early sketches versions like these (hint, hint). 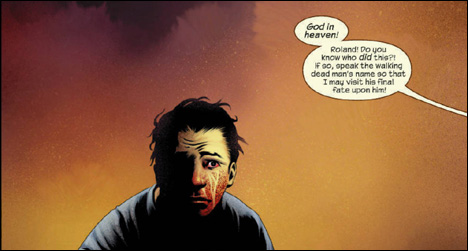 I can’t wait to see how Roland will play out the fact that he killed his mother. Will he admit to the act or blame someone else? In the next issue we’ll probably know. 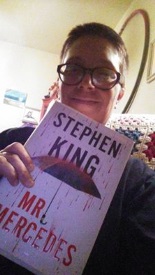