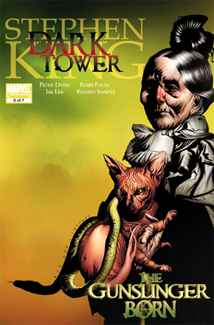 With over half of the story arc done I can honestly say that Gunslinger Born is a success. I’m not speaking of numbers of sold issues though (not sure what those are but I think they are a success as well) but about fan appreciation. Most, if not, all comments that you hear on the Net is positive praise for the comic and in my book that is a success.

In issue #5 Roland and Susan’s relationship in fulfilled by them making love. Afterwards we also get to see an ugly example of Rhea’s evilness. When Susan visited her she hypnotized here and because of that she now tries to cut her hair of… Roland saves the day though and keeps her from completing the act.

Their relationship is not without problems though and it’s not well received by Roland’s Ka-Tet. Especially Alan dislikes it and feels that Roland has lost sight of their mission. This tension between the Ka-Tet gets worse when The Big Coffin Hunters finds out that the boys are all but innocent, that they are in fact gunslingers.

The issue ends with high tension in the Ka-Tet and Jonas finding Bert’s “Lookout” close to where Farson’s tanks are hidden. It doesn’t take him long to realize that the boys know about the tanks and that something has to be done about it...

We also get part 2 and 3 of The Laughing Mirror. The titles are The Seduction of Rhea and The Corruption of Jonas, part 3 of the Stephen King panel and 2 pages from the issue in Jae’s uncolored pencils.

The Seduction of Rhea tells the life story of Rhea and it’s a very interesting story that proves that she has been waiting for Roland for a long time. Very interesting. The Corruption of Jonas tells the story of Eldred Jonas and how he was given the chance to be a gunslinger, trough it away and swore to get revenge on every gunslinger he saw. These two tales are connected by the Laughing Mirror…

Well, what can I say that I haven’t already said? I will admit that I really didn’t think the comic would keep me in its grip for as long as it has. That it would be good I hade no doubt about but that it would be this good? No way. I’m very glad I was wrong though and that Jae, Peter, Robin and Richard keeps delivering what everyone has come to expect from them…and then some.
Add or read comments 0 Comments
Close comments 0 Comments 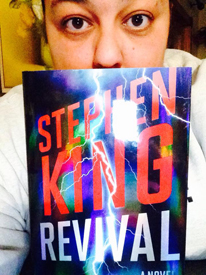