While chatting with screenwriters Scott Alexander and Larry Karaszewski about their work on the Stephen King film 1408 (pictured, and currently set for June 22 release by Dimension), Fango also got a few comments from them about their next Dimension/King project: CELL, to be directed by HOSTEL mastermind Eli Roth. This will be a different ball game altogether from 1408; while that film relies on an unseen, psychological menace, King’s 2006 novel is a thrill ride from page one, his own homage to the zombie films of George A. Romero. In the book, a mysterious “pulse” is emitted by every cell phone in the U.S. turning anybody using one into a vicious, inhuman killer. Those afflicted eventually form a hive mind determined to wipe out the last survivors, who struggle to survive in a devastated New England.

The two scripters see CELL as a chance to not only pull their own variation on the “zombie” genre, but also to make a statement of how technology has overtaken the American lifestyle. “People think they have to be connected at all moments of their lives, so we’re trying to make the movie a big indictment of that,” Alexander continues. “We’re using the novel as a jumping-off point. The book is very sarcastic about this world of people and what they have brought upon themselves with all their friggin’ cell phones and e-mails and pagers and Bluetooths and all this stuff, but after a certain point, the novel sort of moves on to new ideas. We’re trying to keep the movie focused on that original theme, because it’s very timely and provides a really good shape to the material.” But he adds that the movie will reflect the fast-paced, action-packed tone of King’s novel: “There’s much more action in CELL, and particularly because Eli is the director, we’d be crazy if we didn’t make it visceral.”

“There’s not a lot of pretension in CELL,” adds Karaszewski. “The best sequences in the book are the ones that get really violent and horrible and funny all at the same time, and that’s why Eli is the perfect director for it.” The pair are currently completing the script’s first draft, with production tentatively slated to begin in the fall; see Fango #265, on sale in July, for their comments on 1408, and #264, on sale this month, for a chat with that movie’s director Mikael Hafstrom. —Don Kaye 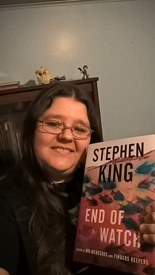