In a brief bit of news from NYCC's Hostel Part II panel, filmmaker Eli Roth revealed that Cell, his big screen adaptation of the Stephen King novel, is currently in the script-writing stage and would be his next project.

"Cell… the writers Scott Alexander and Larry Karaszewski, they were the writers for Ed Wood and 1408, which is an awesome, really scary script. It's going to be so good. They're working a draft right now, so by the time I finish Hostel Part II the script should be ready. I really want to read it."

Focusing on the "curse" of modern technology, Cell tells the story of humanity's last hope — a group of individuals who band together to survive a world infested by zombie-like killing machines. Reverberating through cell phones across the planet, "The Pulse" (as it becomes known) changes all who hear it into relentless killing machines, capable of death and destruction to any one who stands in their way. 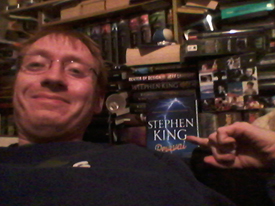