Here are news about thtee projects that might happen.

The Breathing Method (TV series)
The Breathing Method, based on the 1982 short story, has Weinstein Television and Jason Blum producing, Scott Teems writing and Doctor Strange’s Scott Derrickson directing a dark miniseries about a club of lawyers that is intertwined with an horrific death of a pregnant woman en route to deliver a baby from an illicit affair with one of the club members.

House On Maple Street (animation)
DreamWorks Animation is negotiating an option for House On Maple Street, the 1993 King short story about kids who mistrust their new stepfather, for good reason. It’s early days, but this would mark King’s first animated film.

Thanks to Rick Urban & Dimitris Tso 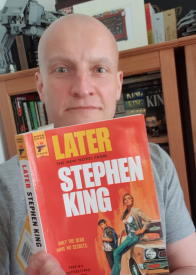