Highlights From Nik Arcel's Ask Me Anything

Yesterday Nik Arcel did a ”Ask Me Anything” session over at Reddit. I have collected the three most interesting questions here for you in case you missed it. And if you want to check out the entire thing you can do so here.

Someone asked what books the move was based on:
The first novel, The Gunslinger, and the third one, The Wastelands. I love the first one for its effectiveness as an introduction to the world and its simplicity in focusing on the characters of Roland, Jake, and Walter. And The Wastelands, we drew most of the inspiration for Jake's story. Even if the film brings in ideas from several of the novels, these are the two from which our main inspirations spring.

Someone asked about the rest of the Ka-tet and how they would solve the racial tension between Detta and Roland:
Yes absolutely! As I think it will be pretty obvious to the fans when they see the film, the whole Ka-tet is poised to meet in the next movie...if we're lucky enough to be able to make one.
We've definitely thought a lot about the racial tension between Detta and Roland and how casting Idris would affect that. I can't spoil anything, but we're definitely not going to leave this important theme unaddressed. And oh yeah, of course we're going to have Billy-Bumblers - and Oy's one of my favorite characters.

Someone asked about the 95 minute length of the movie:
This film really serves as an introduction to the saga and I've always felt that we should not try to cram every single part of the massive mythology, including all the great characters and storylines, into one film. Obviously the story is supposed to continue in future films and the TV series. Hopefully at the end of it all there won't be a single thing from the novels that we haven't touched upon in some way. 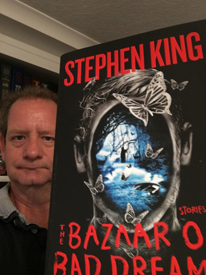