King will be joined by George RR Martin at Albuquerque End of Watch tour. King will be interviewed by Martin. Here is the press release.

ALBUQUERQUE—Longtime Albuquerque indie bookstore, Bookworks, hosts Stephen King June 16 at the Kiva Auditorium at the Albuquerque Convention Center, one of twelve stops on a national tour promoting his new novel, End of Watch. What was already an unbelievable event opportunity has become even more notable, with a very special guest announced as part of the billing.

George RR Martin, Game of Thrones creator, beloved New Mexico author, and patron of the arts, will join King on stage at the Kiva Auditorium, for conversation and an element of literary fantasy that fans of the esteemed authors will find hard to resist.

“We were talking one day at the store about the event, daydreaming about how we would ever be able to score an event more epic than Stephen King. ‘But what if we got George RR Martin to interview Stephen King,’” recalls Bookworks event coordinator Amanda Sutton. Martin has been a friend of indie booksellers in New Mexico and has taken part in several events with the store, including a sold-out in-conversation event with Diana Gabaldon in 2013. Martin also frequently hosts renowned authors at his Jean Cocteau Cinema in Santa Fe.

During a conference call with King’s assistant and publicist at Scribner, the Bookworks team mentioned the idea to have the two authors appear together.

The pieces fell into place when Martin contacted his agent, Chris Lotts, also Stephen King’s agent, expressing interest in hosting King at the Cocteau. No new events were able to be added to the tour, but Martin was invited and graciously agreed to join the bill for the Albuquerque event. He will be in conversation with Stephen King’s son, author Joe Hill, in May 23 at the Cocteau upon release of his book The Fireman. On June 16, Martin will appear with King at the Kiva Auditorium. Both authors are delighted to share the stage.

The authors will sign books prior to the event. Every attendee will receive an End of Watch hardcover with ticket purchase, with 400 signed copies to be distributed at random. End of Watch is the third book in the Bill Hodges trilogy, which began with Mr. Mercedes, an Edgar Award winner, followed by Finders Keepers. All the books in the trilogy, along with many of Mr. King’s titles, will be available at the event, as will signed books from Mr. Martin.

Tickets for Stephen King in Conversation with George RR Martin are available online at bkwrks.com/stephen-king, by phone at 505-344-8139, or in person at Bookworks, at 4022 Rio Grande Blvd NW, Albuquerque. 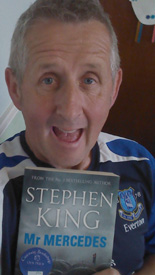