TVGuide.com: You recently signed on to direct the movie version of Stephen King's Cell. What appeals to you about that story?

Roth: I love zombie movies and I love horror movies that have some level of social commentary in them. When you read that book, you feel that Stephen King has been driven crazy by people on cell phones. I think it's such a smart contemporary idea to have everyone on cell phones turn into psychotic serial killers. I've always wanted to do an apocalypse movie, a zombie movie and a Stephen King movie.

TVGuide.com: So you're a fan of his work?

Roth: Oh, yeah. Stephen King is my favorite writer. So many great directors, be it [Stanley] Kubrick or [Brian] De Palma or George Romero, have adapted his work. To have the opportunity to do it was so unexpected. I'm really psyched.

TVGuide.com: You mentioned Stanley Kubrick. He and Stephen King had a famous falling out over The Shining because his film was vastly different than the novel. Would you feel comfortable making alterations to the source material if necessary?

Roth: That was 25 years ago. I think Stephen King is probably in a different place now. I think he really likes me and trusts me. Everybody has told me to just go make the best movie and that if I have to change things, Stephen will be cool with it. Otherwise, I wouldn't have done it. I don't want to upset Stephen King — I want to make him proud — but I've got to have the freedom to change things if I'm going to make the movie. 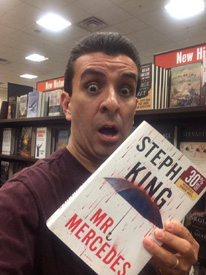