John Cusack in yet another King movie? If you ask the actor himself the answer is yes.


John Cusack has declared his interest in starring in a big screen adaptation of 'Doctor Sleep,' Stephen King's sequel to 'The Shining.'

While there has been no definite talk of a 'Doctor Sleep' movie, Cusack singled it out in a Reddit Ask Me Anything Q&A as a project that he would "accept in a heartbeat" if it was offered to him. 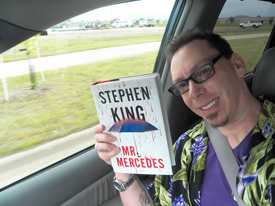