Bloody Disgusting reports about the movie version of Cell.


Eli Roth was years ago attached to direct a big screen adaptation of Stephen King’s Cell, but ultimately passed because technology was moving too quickly. Point was, by the time he developed, filmed and released the movie, it would be “outdated.” He was right.

Either way, now out of Dimension and Weinstein Company hands, Screen Daily is reporting that Cargo Entertainment has attached Paranormal Activity 2‘s Tod “Kip” Williams to direct John Cusack, pictured, in the Stephen King adaptation. Cusack has always been attached to the project.

King and The Last House On The Left writer Adam Alleca adapted “Cell,” which “Centres on a graphic artist who struggles to reach his wife and son in the aftermath of a devastating pulse transmitted through a mobile phone network.” King’s novel is a throwback to his early apocalyptic horror novels. In a single moment, a pulse sent out through cell phones around the world turns every phone user into a crazed, murderous zombie.

Production is set to start in May. 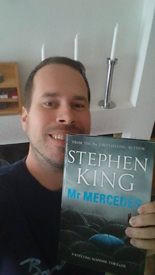