King narrates Wind Through the Keyhole

Stephen King will narrate Wind Through the Keyhole himself when it’s released on April 24th.


“I’ve spent a lot of time with the character of Roland Deschain and the Dark Tower universe over
the years. Now that I am revisiting that world, it felt like a fine time to lend it my voice,” said King.

The Wind Through the Keyhole audiobook will also offer an exclusive audio preview of King’s upcoming novel, Doctor Sleep, the eagerly-awaited sequel to his classic, The Shinin, to be published in 2013. Stephen King will also read the excerpt from Doctor Sleep.

“We’re thrilled that Steve wanted to return to the studio for THE WIND THROUGH THE KEYHOLE. As his audio fans know, he is a terrific narrator,” says Chris Lynch, Executive Vice President & Publisher of Simon & Schuster Audio. “His choice to preview his follow up to THE SHINING exclusively on audio speaks volumes about his support for the format. We couldn’t be happier.” 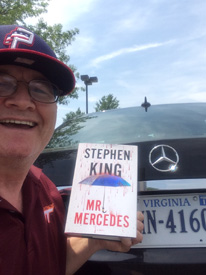