Dr. Sleep has now been officially announced. This was posted on King's official site today:


It's now official--Stephen is working on Dr. Sleep, the sequel to The Shining. This weekend Steve read an excerpt from this at his appearance at George Mason University. They have given us permission to post their taping of the event here on Steve's site which we will do as soon as we receive the file. Dr. Sleep's plot includes a traveling group of vampires called The Tribe which is part of the passage he read from.

Thanks to Ari.
Read all Doctor Sleep news
To the news archive 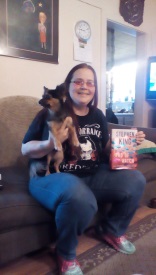