The Wind Through the Keyhole in the UK

Hodder & Stoughton announced today that they have bought The Wind Through the Keyhole for a release next spring. Here is the ful press release:


Hodder & Stoughton are delighted to announce the acquisition, from Chuck Verill at Darhansoff & Verrill
in New York, of THE WIND THROUGH THE KEYHOLE by Stephen King, a further title in the Dark Tower series, to be published worldwide in hardcover in the spring of 2012.

This novel will join the seven volumes, already published, that make up the series. As King's UK editor, Philippa Pride, puts it, 'For those of us who are hooked on the bestselling fantasy/adventure series already, it is a wonderful reunion! For readers who have yet to embark, it is a delightful way into the series as the novel stands perfectly alone - a story within a story - and features both the older Roland and the younger.'

Why did the author return to a series completed eight years ago? King had 'started thinking - and dreaming - about Mid-World again. What happened to Roland, Jake, Eddie, Susannah and Oy ...? There was a storm, I decided. One of sudden and vicious intensity. And little by little, a story began to take shape. I saw a line of riders, one of them Roland's old mate, Jamie DeCurry, emerging from clouds of alkali dust thrown by a high wind. I saw a severed head on a fencepost. I saw a swamp full of dangers and terrors. I saw just enough to want to see the rest.'

Verrill comments 'the book is fabulous, and should be wholly satisfying to both Dark Tower cognoscenti and newcomers who are bound to be drawn in.'

Hodder will relaunch rejacketted paperbacks of the entire series alongside, as part of their major King reissue programme. 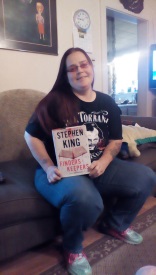