Most pressing, however, are plans to finish his collaboration with King for the musical drama, "The Ghost Brothers of Darkland County."

"You can't believe the s-- we're going through, dealing with everything," Mellencamp said. "The same guys who did (the Monty Python-influenced) 'Spamalot' are involved now and hopefully it's going to become less hectic. This is not like painting. Now there's like 40,000 people involved."

Death and reconciliation are major themes in the King-Mellencamp collaboration. As he explained to Billboard recently, King's story involves two young men, brothers, who dislike each other immensely. Their father takes them to their family vacation cabin, where, a generation before them, the father's two older brothers killed each other in a similar sibling rivalry.

"There's a confederacy of ghosts who also live in this house," Mellencamp told Billboard. "The older (dead) brothers are there, and they speak to the audience, and they sing to the audience. That's all I want to say, except through this family vacation, many things are learned about the family, and many interesting songs are sung."

Several months ago during an interview at his Brown County recording studio, Mellencamp excitedly played a couple of the songs from the show.

"Some of the songs were written four or five years ago. I was shooting in the dark then. Now I know exactly where we're going and I've got a lot of work in front of me." 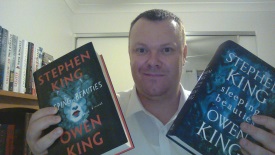