Ghost Brothers of Darkland County is the latest title

Some info about King and Mellencamp's collaboration has been released. The projects last title is Ghost Brothers of Darkland County but it seams to change quite a lot...


The rocker's next project is a theater piece, "Ghost Brothers of Darkland County," with novelist and screenwriter King.

"It's our dramatic play with music; I don't want to call it a musical," he said of the vehicle that has been four years in the making. "He's got a hundred pages of dialogue, and I've got 15 songs. Add all that up and, 'So far, Steve, we've got about five hours worth of play.' We have to figure how to cut it all down. We're having our first run-through in New York with actors and actresses to see what the hell it looks like."

Much of the play takes place in the 1940s in Louisiana and Mississippi, so Mellencamp has been writing blues, Cajun, zydeco and jazz tunes -- but no rock.

"If anyone's got the crazy idea that this is 'Jack and Diane' meets 'Cujo,' they're nuts," the Indiana rocker said.

Thanks to Bev Vincent.
Read all The Ghost Brothers of Darkland County news
To the news archive 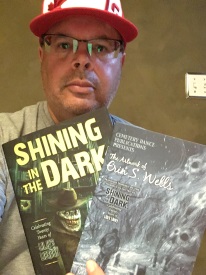