4 covers for UK paperback edition of Under the Dome

Hot on the heels of the news that the creative team at Hodder has won the Book Marketing Society’s Best Campaign Award for Stephen King’s latest hardcover, UNDER THE DOME (published in November, 2009), and nominated as finalist in the Revolution Awards 2010, Hodder is proud to announce plans to take the paperback to an even greater audience when it is published in July.

The strategy behind the summer publication is to generate the excitement usually expected from a major television or film launch, and the campaign is designed to reach a raft of new readers, challenging people’s perception of Stephen King and connecting with an audience usually outside the reading culture.

Hodder are unveiling a radical new package featuring four different covers, each reflecting in a filmic way characters from UNDER THE DOME. The marketing campaign supporting publication will seek to bring to life individuals featured on these covers. Media used will include national outdoor posters, on-line advertising and a dedicated website with stories and recordings from characters in the book. The plan is very much to reach a bigger audience than for any previous King paperback whilst involving the reader in a very personal and intimate way.

UNDER THE DOME is the most successful and biggest selling King hardcover this decade and Hodder expects that their innovative and energetic approach to the paperback will reap similar rewards. 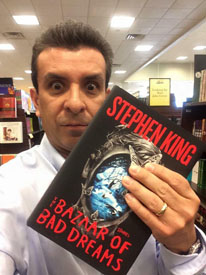