Jonathan over at STEPHEN KING COLLECTORS sent me the following:

The following short article, "The Sing of Horror" comes from the November/December 2001 "Pages" magazine:


"John Mellencamp and Stephen King are continuing to develop their ghost-story musical, which is expected to open in the spring of 2002. Mellencamp says he hopes to see the as-yet-unnamed musical on Broadway--someday. The rocker and the writer will finalize the project some time in Febuary. Mellencamp, who's writing 15 songs for the show, calls King's script "the most beautiful story." 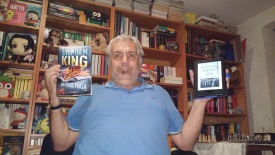