Elvis: “The Shape” is the name of a character that I’m portraying in a piece which is being constructed. It’s an unusual form. It’s a sort of a radio play, as it were, except it’ll be on record. It’s a collaboration between John Mellencamp and Stephen King, produced by my friend T-Bone Burnett, and a number of singers, some of whom are friends like Roseanne Cash and people that I’ve recently met through Spectacle like Neko Case, Cheryl Crow, likewise, and Kris Kristofferson. There are actually a number of people that have been on Spectacle but that’s purely, completely coincidental. But we happen to be all characters in this story, and “The Shape” is this sort of demonic, satanic I suppose, demonic rather than satanic, the provocateur character that nobody sees but whispers in everybody’s ear. Typecast again. But it’s interesting to do. I think some people got hold of the wrong end of the stick and imagined it was going to be a Broadway musical, but I think it would be pretty tough to imagine all those people showing up for Broadway.

Elvis: But this is another way to do it, I think it’s an interesting way to do it, get people into the studio and record. It’s kind of like a collage almost of dramatic performances, and a lot of the songs are written in character voices. I’ve written a number of songs where I’m not that person that’s singing, there’s even reprehensible characters in songs where I wouldn’t want to be that person. But here I’ve got a little more licence to go a bit further with that, because it’s somebody else’s character that’s been created and I have to sort of try and bring it to life in some way that made sense to me and I hoped that they liked it. People are trying different things. The record company relationship with artists is less dominant than it used to be. People are able to sort of try some different forms without being worried about losing radio play in Idaho. Nobody cares about that anymore. If there’s a good station in Idaho, then they can have a direct conversation with you. If there isn’t, then you’re not losing anything by doing something that’s interesting to you. It’s probably a good idea to give it a try, see what happens. 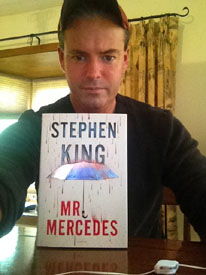