King will finish musical in February

According to John Mellencamp he and King will finish the musical that they have been working on in February:

Mellencamp said the two plan to meet in February to finish the musical, which he termed "an American story."

"Steve has written the most beautiful story," he said. "I've written about five songs for this thing and there's not one rock song anywhere near it."

Mellencamp said he still has about 10 songs to write for the production.

"If this works like we think it's going to, it'll be great," he said. 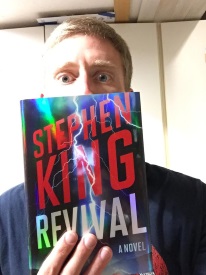