Torontoist reported the following about a posible sequel to The Shining:


Last night at Toronto’s packed Canon Theatre, fans of Stephen King were treated to a 15-minute reading from the author’s new novel, Under the Dome, and nearly an hour’s worth of typically funny anecdotes and keen observations during an on-stage interview with director David Cronenberg. Then King dropped a fan bombshell on the crowd by casually describing a novel idea he began working on last summer. Seems King was wondering whatever happened to Danny Torrance of The Shining, who when readers last saw him was recovering from his ordeal at the Overlook Hotel at a resort in Maine with fellow survivors Wendy Torrance and chef Dick Halloran (who dies in the Kubrick film version). King remarked that though he ended his 1977 novel on a positive note, the Overlook was bound to have left young Danny with a lifetime’s worth of emotional scars. What Danny made of those traumatic experiences, and with the psychic powers that saved him from his father at the Overlook, is a question that King believes might make a damn fine sequel.

So what would a sequel to one of King’s most beloved novels look like? In King’s still tentative plan for the novel, Danny is now 40 years old and living in upstate New York, where he works as the equivalent of an orderly at a hospice for the terminally ill. Danny’s real job is to visit with patients who are just about to pass on to the other side, and to help them make that journey with the aid of his mysterious powers. Danny also has a sideline in betting on the horses, a trick he learned from his buddy Dick Hallorann.

Perhaps sensing that he’d let the cat out of the plot bag a little early, King then told Cronenberg and the audience that he wasn’t completely committed to the new novel, going so far as to say, “Maybe if I keep talking about it I won’t have to write it.” 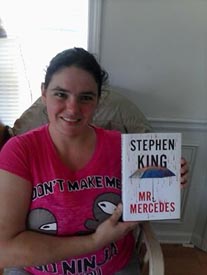