It seams that George Romero hasn't given up on doing a movie version of The Girl who loved Tom Gordon. In a recent interview he had the following to say about it:


JJ: Besides Dracula and the fourth Dead film, what else are you working on?

GR: I'm working with Stephen King on a novel of his called The Girl Who Loved Tom Gordon. It was a novel released five or six back or maybe even more. It came out in 1999 or 2000.

SH: I've picked it up, but I haven't had a chance to actually read it yet.

GR: Well it's not a typical King scare thing. It's about a little girl that gets lost in the woods and it has some spooky stuff in it. It has some scares in it.

JJ: Is that in the beginning stages?

GR: No, we've been working on it for a long time actually. Nobody wanted to do it at first because it wasn't typical King thing and it wasn't a typical Romero thing. It's more like Stand By Me in a way.

JJ: But it's looking like it's going to happen?

GR: Now it's looking like it. The star of the thing is a nine year old girl..

JJ: That's got to be hard to cast.

GR: Yeah, but that may actually be the thing that gets the movie made. We're talking now with this nine year old girl that's getting hot.

Thanks to David Sjödin.
Read all The Girl Who Loved Tom Gordon news
To the news archive 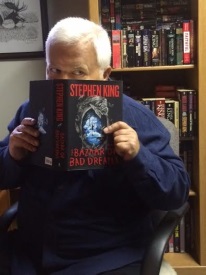