The Wind Through the Keyhole

Here is a clip from the book signing King did at Walmar in Dundalk, Maryland yesterday. In the Q&A he confirmed the new Dark Tower book, that Under the Dome will be an HBO miniseries and that he has written a script for Cell. This clip is shot by Steven Seebode.

Also, this was posted on King’s board:


The moderator at S.K. message board gave details on the new D.T. book:
"Stephen has given me permission to pass along that he has an idea for a new Dark Tower book, the working title of which will be THE WIND THROUGH THE KEYHOLE. He has not yet started this book and anticipates that it will be a minimum of eight months before he is able to begin writing it." 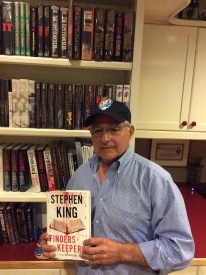