Marvel Comics' Editor-in-Chief Joe Quesada had this to say when a fan noted that novelist Stephen King had said in a web interview he'd be doing some work for Marvel.


"Let's say, hypothetically, that we were doing business with Steven King. Would that be cool?" The crowd responded enthusiastically "Yes" and Quesada replies "Let's leave it at that, then."

Thanks to Ari.
Read all The Dark Tower Comic news
To the news archive 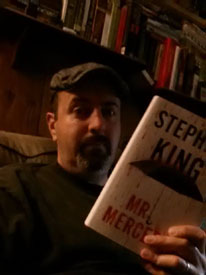