It looks like we'll get a remake of King's Maximum Overdrive in the not to distance future. Dread Central had this report today:

The year was 1986 and the directorial debut of horror icon Stephen King roared off of the big screen like a big bloody fun behemoth. The AC/DC soundtrack kicked ass, the Green Goblin's head has never been the same, and to this very day we refuse to look at any appliance the same way ever again.

Can a remake of this cult classic capture the same kind of magic? Who knows, but according to Variety Dino De Laurentiis Co. has one waiting in the wings.

In terms of news regarding this upcoming remake, that's really all there is at the moment. Don't worry though, we'll keep our ears to the ground and if those big-ass semi's start rolling you'll be the first to know about it. 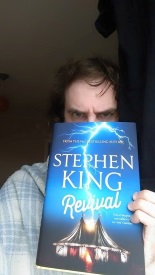