NEWS - THINGS THEY LEFT BEHIND

The Things They Left Behind Mentioned

It's been a while since we heard about The Things They Left Behind (September 2014 to be exact) but in this article it's mentioned.

More on The Things They Left Behind

More info about The Things They Left Behind:


Published as part of the collection Transgressions: Volume Two, King’s original tale follows a 9/11 survivor plagued by guilt. One day, objects belonging to his deceased former co-workers start showing up at his house. Unable to get rid of him, he enlists the help of his neighbor to return them to the families of the dead.

CBS’ adaptation seems to retain the same basic premise, as TV Line describes The Things They Left Behind as a supernatural procedural drama about “an unlikely pair of investigators carrying out the unfinished business of the dead.”

The network has given a put pilot commitment to The Things They Left Behind, meaning they’ll owe producer Warner Bros. TV a lot of money if the pilot never airs. In other words, it’s all but guaranteed that CBS will pick up the series.

In addition to writing the script, Grahame-Smith will executive produce along with David Katzenberg, Greg Berlanti, and Sarah Schechter. TV vet Berlanti’s credits include The CW’s Arrow and The Flash. Additionally, it was announced last week that he was developing a Supergirl TV series.

The Things They Left Behind Lands on CBS

Looks like CBS will be the channel who gives us The Things They Left Behind. Personally I had preferred another, more reviewer friendly channel, but this is where it landed.


In a competitive situation, CBS has landed The Things They Left Behind, a supernatural procedural drama based on Stephen King’s short story, from Seth Grahame-Smith, and Greg Berlanti. The project, produced by Warner Bros. TV and Berlanti’s studio-based Berlanti Prods., has received a put pilot from the network, which has had success with another drama adaptation of a work by King, summer series Under The Dome. Written by Grahame-Smith, The Things They Left Behind centers on an unlikely pair of investigators carrying out the unfinished business of the dead. Grahame-Smith and his producing partner David Katzenberg will executive produce through their KatzSmith banner, along with Berlanti Prods.’ Berlanti and Sarah Schechter.

What do you think, will this be something you'll be watching?

Things they Left Behind

Things they Left Behind has been optioned for a movie: 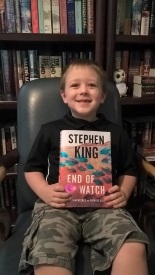