Eli Roth has left Cell but now John Harrison has taken over and is about to turn it into a TV mini-serie. Here is what Dread Central writes about it:


"Some cool news just came out during the Q&A following the North American premiere of John Harrison's adaptation of Clive Barker's Book of Blood. According to Harrison he has just signed up to adapt Stephen King's technology spawned zombie story Cell. Following the demise of the Eli Roth adaptation, Harrison was approached to do a TV mini-series version.

And here is what Fangoria has to say about it:

Fango’s Tony Timpone just called up from Montreal’s Fantasia film festival with a hot scoop: John Harrison, whose Clive Barker-based feature BOOK OF BLOOD is premiering at the event, is writing a four-hour miniseries based on Stephen King’s CELL. The 2006 novel sees the population of America transformed into mindless, rampaging killers by a signal sent through their cell phones.

Harrison is scripting CELL for the Weinstein Company, which had originally planned to turn the book into a theatrical feature (with Eli Roth attached at one point to direct), but decided to abandon those plans and will be shopping the project to networks instead. Having served as assistant director/composer on the King-scripted CREEPSHOW and helmed TALES FROM THE DARKSIDE: THE MOVIE (including an adaptation of the author’s “Cat from Hell”), Harrison considers CELL one of King’s best recent books, with opening chapters that will make an incredible first 30 minutes on screen. The filmmaker adds that he doesn’t see this as a zombie story so much as a VILLAGE OF THE DAMNED-esque chiller, and enjoys the fact that the infected populace possesses a hive mentality. While he has been officially contracted to direct, he would certainly like to. BOOK OF BLOOD screens at Fantasia tonight at 7 p.m. (the show is almost sold out as of now); look for exclusive video of Harrison discussing BOOK, CELL and other projects at this site tomorrow!

Thanks to Al Mattice, Larry Fire and Uncle Creepy.

In an interview with Cemetery Dance Richard Chizmar and Johnathon Schaech revealed the following:


CEMETERY DANCE: You're also involved in several Stephen King projects. Can you update us on their progress?

CHIZMAR/SCHAECH: We have been working on FROM A BUICK 8 for so long and are finally so close to a "go" that we are afraid to talk too much about it and jinx it. What we can say is that we are currently working on one final rewrite for director Tobe Hooper and producer Mick Garris and the good folks at Amicus (producers of the recent STUCK and forthcoming IT'S ALIVE remake). Once the rewrite is completed, they are prepared to go right into pre-production with plans to film on the East Coast.

We also adapted BLACK HOUSE for Akiva Goldsman (A BEAUTIFUL MIND, I AM LEGEND, CINDARELLA MAN) and his Weed Road production company. As opposed to BUICK, where we are writers and producers, we are only writers on BLACK HOUSE, so we are just along for the ride. Hopefully, something will happen soon.

Finally, there is a third King adaptation we are working on with Samuel L. Jackson...but we can't say much about this for another couple months.


C: Since we're running out of time, I want to talk to you about your Stephen King adaptation CELL. This is your first film that you will not have written. Are you concerned that you're going to be ultra-critical of the script that comes to you next week?

ER: Of course. But I'm also working with really great writers. Sure it's my first time doing it, but if I'm going to do this to see if I can do it…I mean, look, obviously Spielberg does it, millions of directors do it, this is a good way to do it with a Stephen King book. I'm also working with two of the greatest writers in Hollywood Scott Alexander and Larry Karaszewski [co-writers of ED WOOD, THE PEOPLE VS. LARRY FLYNT, MAN ON THE MOON, and the upcoming King adaptation 1408], and if there's something I want to change tonally, I'll direct them as I direct any department. If I let my DP come in with his own list of shots, I'd say, that's not how we're shooting the film. If I saw my production designer designing stuff without my direction, I'd go, "That's not how it's going to be." So I have to approach it the way I'd approach any department, and give very strong, clear direction. And obviously, I've been very busy with HOSTEL: PART II that I haven't had a chance to focus, so what I'll do is get the script. I'm sure they will write a great draft, but if it's not what I'm looking for, we'll get it to that and I'll work with them they way I work with a cast member or DP or editor.

C: Do you have Stephen King movies?

ER: I love CARRIE, and I love CREEPSHOW, I love THE SHINING, I love 'SALEM'S LOT. Those are all really terrific; there are so many great ones. I mean THE SHINING is it for me.

C: You may be introducing yourself to a new audience by adapting one of his books.

ER: I think they'll be a lot of crossover audience. They'll at least know that he had to have seen HOSTEL to approve it. But I told everyone, it's going to be an adaptation, not a re-creation. I'm not filming the book; I'm using the book as source material and writing a script based on that. That was the first thing I said, I don't want to piss of Stephen King. I hear he didn't like THE SHINING, and THE SHINING's my favorite. I said, As long as I can change stuff I'll be involved, and he said it's totally cool.

Thanks to Anders Jakobson 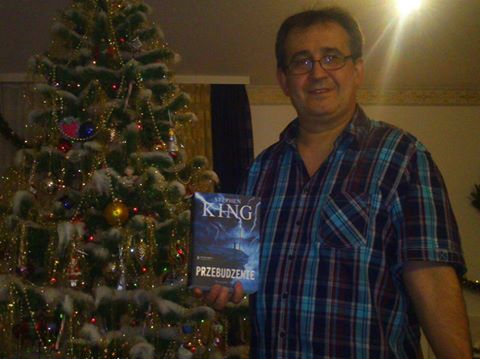