The Plant In French

Telecompaper reports that director Alexandre Aja is working on a French language version of The Plant.

The video production company of Spanish broadcaster and sports rights broker Mediapro has announced a strategic alliance with Wild Sheep Content, the production company founded by former Netflix executive Erik Barmack. Under the terms of the deal, The Mediapro Studio will partner with Wild Sheep in developing and distributing new shows and films globally.
They include projects currently being developed by Wild Sheep, including a French language version of the Stephen King novel “The Plant” created by horror director Alexandre Aja, a scripted version of the popular documentary “Cocaine Cowboys” and “Marked for Life”, a Scandinavian series based on Emelie Schepp's best-selling crime novels featuring Swedish prosecutor Jana Berzelius.

Mediapro launched its production studio in Madrid last year and has 34 scripted series already in production worldwide across 10 creative offices.

Thanks to Bryant Burnette 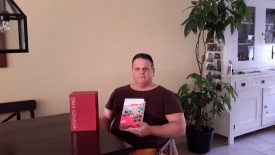