News From The UK

A lot going on in the UK. Here is the latest newsletter from Hodder & Stoughton.

Fans Get The Institute 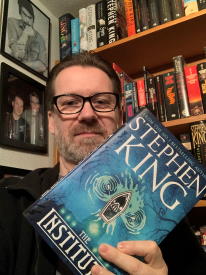 Stephen King’s The Institute, is out and you know what that means…

I want to put together a page with photos of you all and your copy of The Institute. All you need to do is send me a photo (this should open an email but if it doesn’t, send the photo to info[a]liljas-library.com) of yourself and the book (any edition works) and I’ll post them here. If you don’t want to send it by email you can also post it on the facebook page and I’ll grab it there. I would also like to ask you to include your name, town and country so that I can list that with the photo. You can see what it will look like at the Mr Mercedes page, the Revival page, the Finders Keepers page, Bazzar of Bad Dreams page, End of Watch page, Charlie the Choo Choo page, Gwendy’s Button Box page, Sleeping Beauties Book page or The Outsider Book page

Check out all The Institute photos here.

Stephen & Joe At The Somerville Theater

Here is a photo from Steve and Joe’s reading last night at Porter Square Books. Looks like a great night! 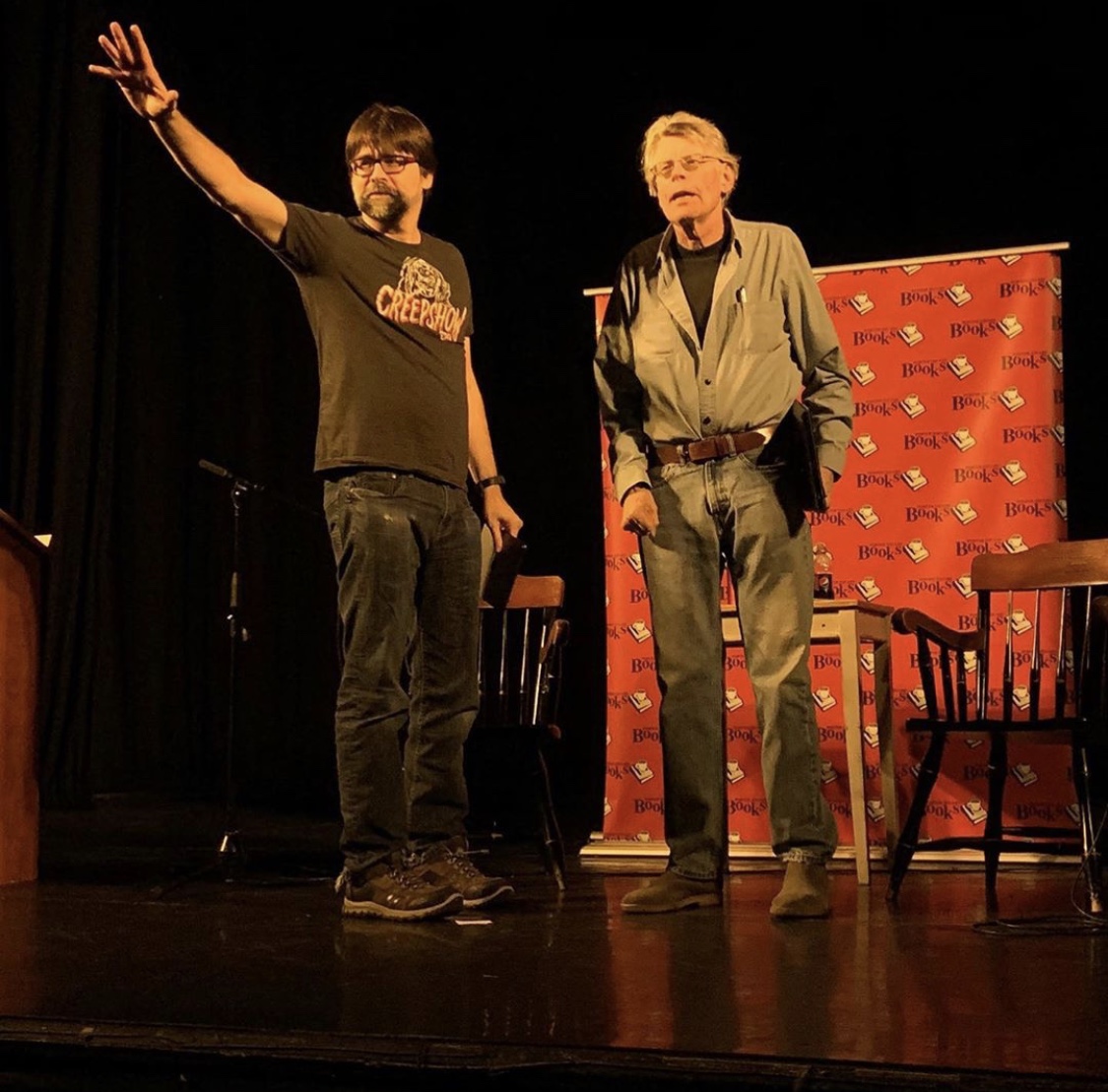 Here are three clips from The Late Show with Stephen Colbert.

Clip Of King From The View

Stephen King on The View. 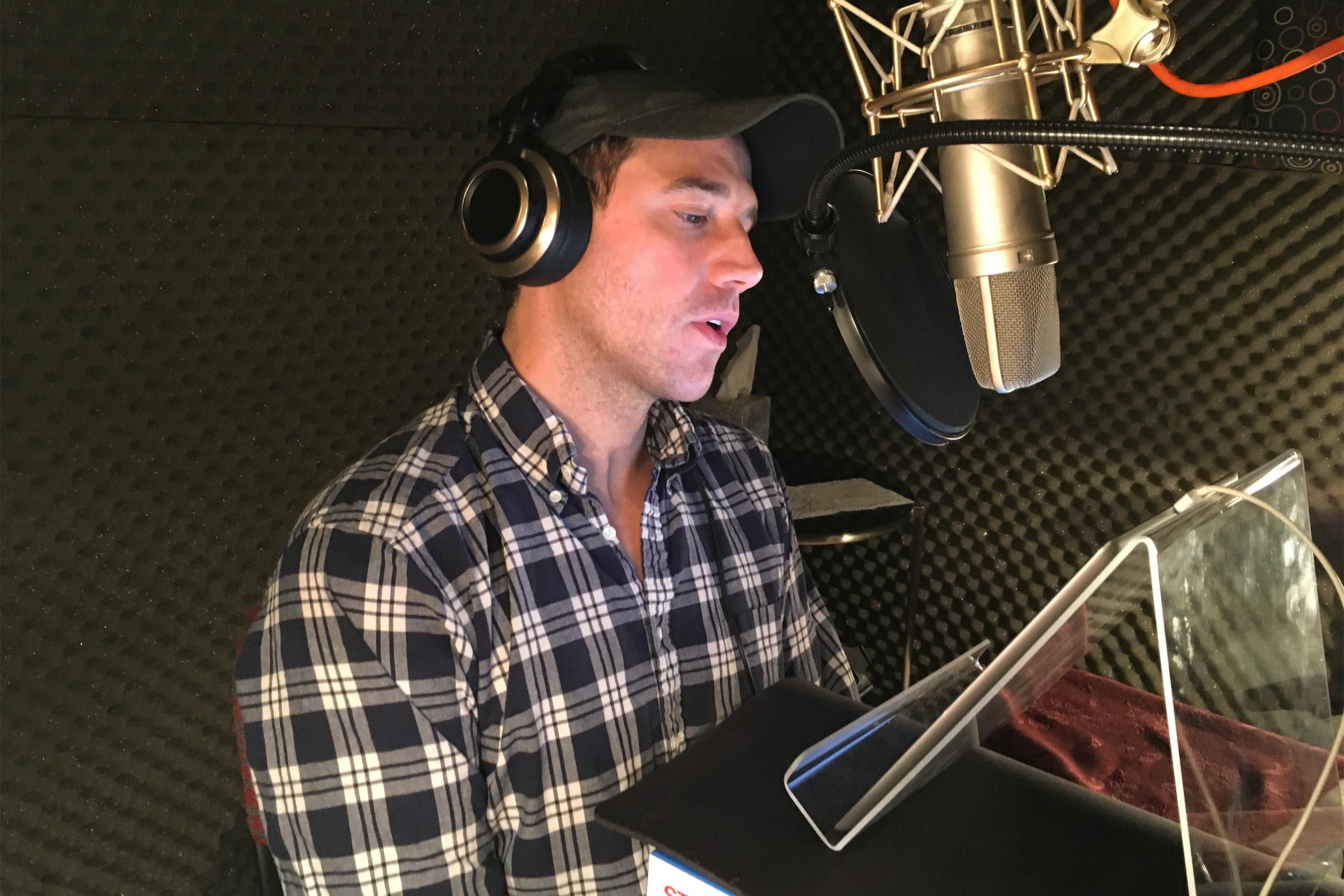 Stephen King and Jamse McAvoy will be visiting The Late Show with Stephen Colbert tonight.

Steve And Bill On GMA

King will be on TV to promote The Institute in the coming days. Here are the shows we know about so far.

My Thoughts On The Institute 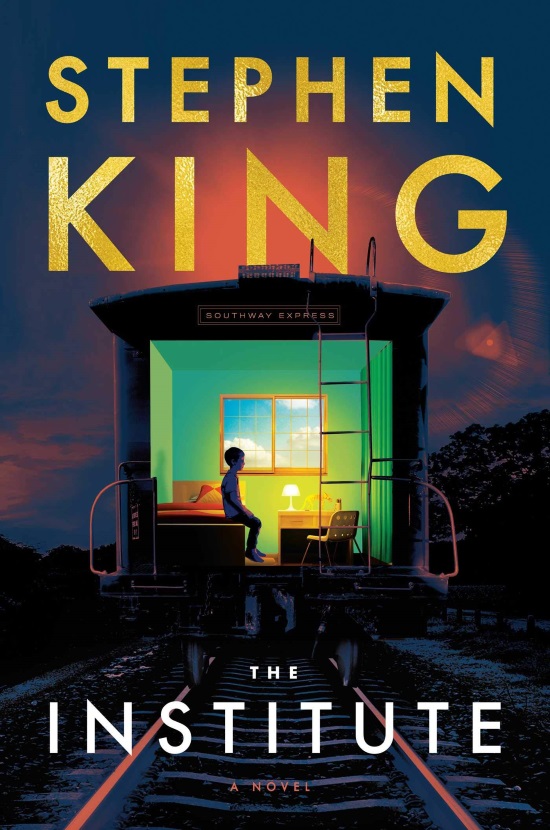 Here are my spoiler free thoughts about The Institute, out today!

As he has done in many earlier books King taps in perfectly to the kids in the story and manages to tell their story in a believable way.

Porter Square Books wil bring you a very special event on October 10: an evening with Joe Hill and Stephen King!

They will be hosting Joe Hill and Stephen King at Somerville Theatre in Davis Square, Somerville MA on Thursday, October 10th, 2019, at 7pm, and the two authors will sit down together to discuss their respective new books, Full Throttle and The Institute.

Tickets will go on sale on Friday, September 13th at 12:00 pm noon ET, and there are a few purchasing options. Head over to their website for more info.

King About Trump, The Institute & Books To Come...

Here i s an interview with King that Rolling Stone did about Trump, The Institute and books to come...

King’s next book, If It Bleeds, is due out sometime in 2020. It’s a continuation of his ongoing Holly Gibney detective series. “I have to do a polish on that,” he says. “But it’s basically done.” He’s already jamming away on the one after that (though he’s not ready to divulge any details) and the sudden surge of interest in his work has been a great motivator to keep going. “I’m 71 years old,” he says, “and a lot of people my age are forgotten and I’ve had this late season burst of success. It’s very gratifying.”

Tony Award-winning actor and star of the musical Tootsie Santino Fontana will narrate The Institute. The Audio book is released by Simon & Schuster Audio on September 10th. 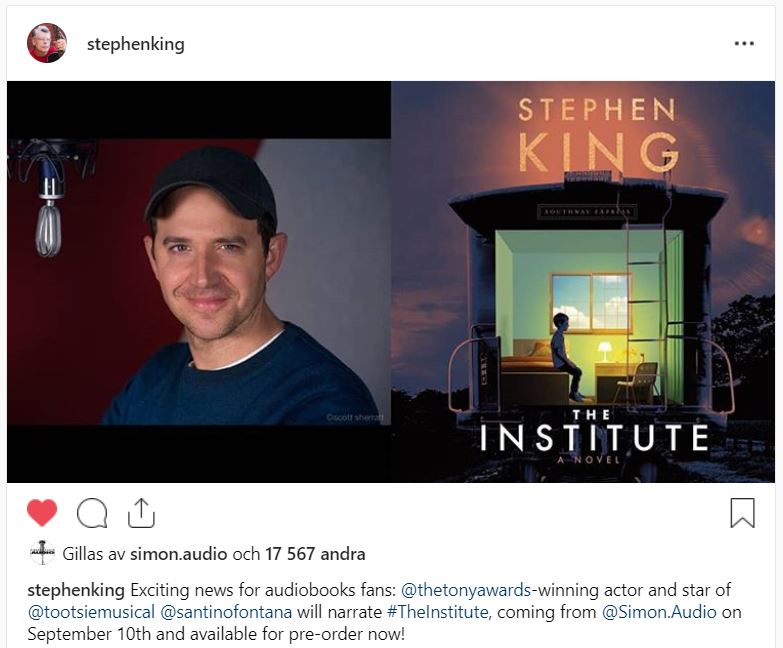 56 days until The Institute is released. Have you pre-order your copy? If not and if you want to support Lilja’s Library (and shop at Amazon.com) please use the following links: 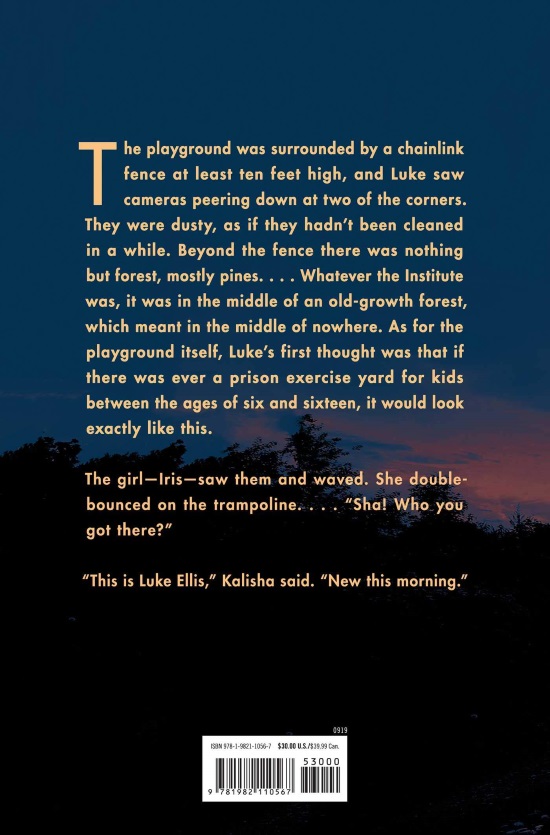 New Excerpt From The Institute

Check out this new excerpt that Hodder & Stoughton just released from the upcoming The Institute. 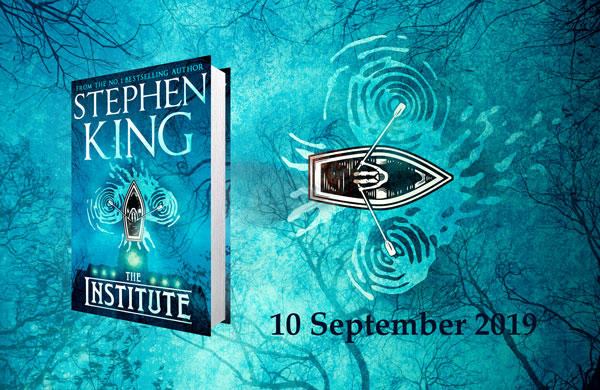 Excerpt from The Institute

EW has a short excerpt from The Institute (it’s below the cover).

UK Cover For The Institute

Here is the UK cover for The Institute and Hodder & Stoughton’s plot description. 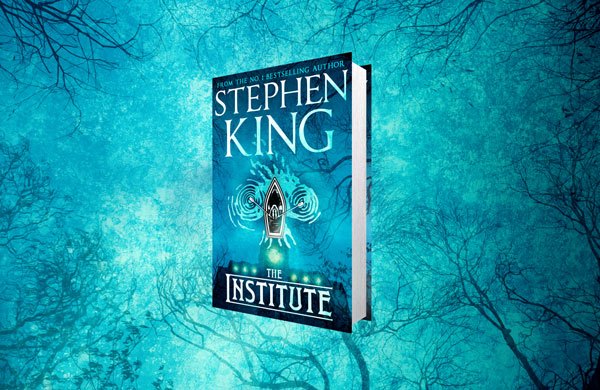 There’s Only One Way Out…

Deep in the woods of Maine, there is a dark state facility where kids, abducted from across the United States, are incarcerated. In the Institute they are subjected to a series of tests and procedures meant to combine their exceptional gifts – telepathy, telekinesis – for concentrated effect. Luke Ellis is the latest recruit. He’s just a regular 12-year-old, except he’s not just smart, he’s super-smart. And he has another gift which the Institute wants to use…

Far away in a small town in South Carolina, former cop Tim Jamieson has taken a job working for the local Sheriff. He’s basically just walking the beat. But he’s about to take on the biggest case of his career.

Back in the Institute’s downtrodden playground and corridors where posters advertise ‘just another day in paradise’, Luke, his friend Kalisha and the other kids are in no doubt that they are prisoners, not guests. And there is no hope of escape.

But great events can turn on small hinges and Luke is about to team up with a new, even younger recruit, Avery Dixon, whose ability to read minds is off the scale. While the Institute may want to harness their powers for covert ends, the combined intelligence of Luke and Avery is beyond anything that even those who run the experiments – even the infamous Mrs Sigsby – suspect.

Thrilling, suspenseful, heartbreaking, The Institute is a stunning novel of childhood betrayed and hope regained.

The Institute will be released in hardback, export trade paperback, ebook and audio on 10 September 2019.

Cover & Pagecount For The Institute

Here is the cover for The Institute. both King’s site and Amazon says it’ll be 576 pages. 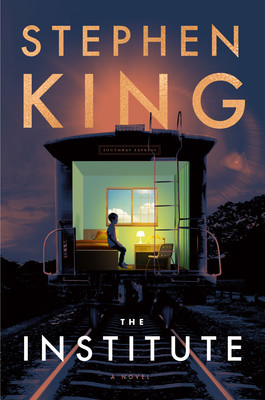 The Institute: King's Next Book

In the middle of the night, in a house on a quiet street in suburban Minneapolis, intruders silently murder Luke Ellis’s parents and load him into a black SUV. The operation takes less than two minutes. Luke will wake up at The Institute, in a room that looks just like his own, except there’s no window. And outside his door are other doors, behind which are other kids with special talents—telekinesis and telepathy—who got to this place the same way Luke did: Kalisha, Nick, George, Iris, and ten-year-old Avery Dixon. They are all in Front Half. Others, Luke learns, graduated to Back Half, “like the roach motel,” Kalisha says. “You check in, but you don’t check out.”

In this most sinister of institutions, the director, Mrs. Sigsby, and her staff are ruthlessly dedicated to extracting from these children the force of their extranormal gifts. There are no scruples here. If you go along, you get tokens for the vending machines. If you don’t, punishment is brutal. As each new victim disappears to Back Half, Luke becomes more and more desperate to get out and get help. But no one has ever escaped from the Institute.

As psychically terrifying as Firestarter, and with the spectacular kid power of It, The Institute is Stephen King’s gut-wrenchingly dramatic story of good vs. evil in a world where the good guys don’t always win. 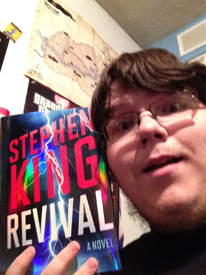