Tobin Bell To Star In My Pretty Pony

Tobin Bell, star of SAW movies will star in an adaptation of King's My Pretty Pony.


“Saw” star Tobin Bell and Noah Jupe are top-lining in the independent drama “My Pretty Pony,” based on the Stephen King short story.

Shooting is planned for Michigan this spring. The story follows an elderly man on his deathbed who gives his young grandson a pocket watch and warns the boy against the dangers of letting time slip away.

Luke Jaden is directing from a script he adapted based upon King’s story, first pubished in 1989.

Phil Wurtzel of Friel Films is producing. Brian Kavanaugh-Jones (“Loving” and “Midnight Special”) and Josh Boone (“The Fault in Our Stars”) are executive producing. 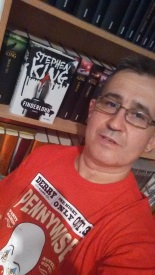