Desperation as a miniseries on CBS?

Smilin Jack Ruby talked about Desperation with Mick Garris. Here is his report (from Dark Horizons): 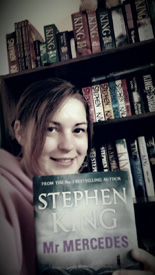