This article has been out for a few weeks but there are some quotes from King that might be of interest.


“[The movie] starts in media res, in the middle of the story instead of at the beginning, which may upset some of the fans a little bit, but they’ll get behind it, because it is the story,”

“They’re still holding on to this idea that they can do a TV series, and they’ve got it pegged for that, and it would seem everyone involved is waiting to see if the movie clicks with audiences before going all in with a massive franchise. Other people have tried fantasy spectacle. Sometimes it works, sometimes it works really well when it’s based on a series of books, like 'The Hunger Games' or 'Harry Potter,' and sometimes it doesn’t. What I have to go back to is this: We have Idris Elba and Matthew McConaughey, two great actors. You’ve got a great production team and Akiva Goldsman as the primary script writer. The team is in place, so we’ll hope for the best.”

“A lot of it takes place in our day, in the modern world” 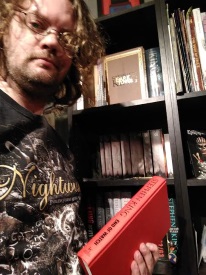