How well do you know your King? Below are 30 author photos and 10 titles and your job is to pick the right photo for the right book. Please note that these photos are from the US hardcovers and might not be the same as in other editions.

You'll see the title above the three photos and what you need to do is pick the photo that was on that book's dust jacket. When you think you got all 10 you submit your answers and see how many of them you got correct. If you answer incorrect on some I won't tell you which is the right answer, but you can very easily try again... But to make things a little bit more complicated, the order of the photos is different every time... 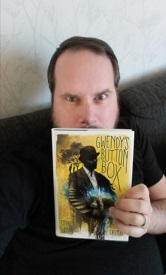