Are you looking for a job?

And a fan of the TV series Dexter? Keep reading!

[GEORGE NOVIKOV] 30s to 40s. Russian heritage but American born, so no accent. Tough, aggressive, possibly a little overweight but imagines he is "all that". Basically, he's just not a good guy. RECURRING GUEST STAR.

[VIKTOR KAREV] 30s, handsome, well dressed, stylish, slight Eastern European accent. He is a polished businessman who can get his hands dirty when he has to. GUEST LEAD.

[DET. ANGIE MILLER] 30s, African American. Attractive, straightforward, she is a divorced mother of two who has no time for nonsense, so she simply goes about her job at Miami Metro Homicide. MAJOR RECURRING CO-STAR ROLE.

[TICKET AGENT] 30s, Caucasian, female. She is a ticket agent at an airport. 1 Speech and 2 lines/1 scene.

[BLACK-HAIRED STRIPPER] Mid 20s to early 30s and with a thick Russian accent. She is a stripper at a Miami strip club. 2 lines/1 scene. 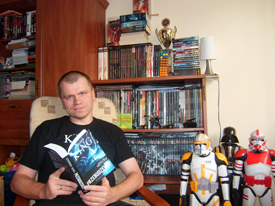