From the 10/3 issue of Entertainment Weekly. A letter about the most recent column, and for the first time in a long time, if ever, King responds to it.

Lee Child and Michael Connelly are among my favorite authors, while current chick lit makes me gag (The Pop of King). What's appealing about "manfiction" characters is their confidence, humor, and sense of morality. I'd rather read about them than the hunk on the tropical isle Stephen King described.
Nancy Urbanis, Tunkhannock, PA

Thanks to Bev Vincent
To the news archive 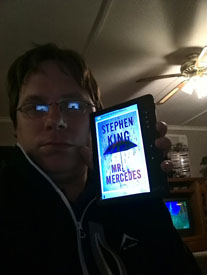