The second issue of Treachery is here and as usual it picks up right where the previous issue ended. This time we get to see the gunslingers as the young men (almost kids) they really are; competitive and teasing. We also get to know a new character, Aileen Ritter. A girl in a mans-world that wants to be a gunslinger and whom also happens to be the niece of Cort, the gunslinger trainer we know from before.

At this time and in Mid-World it’s not possible for a woman to be a gunslinger but she isn’t about to let that stop her. After breaking in to the armoury she challenges the boys in a shooting and does very well. I really look forward to see what’ll happen to her in the coming issues. I think she will be an interesting character to follow.

We also get to see how Roland’s dad helps a wounded gunslinger by poring gunpowder over his open wound and setting it on fire. It’s a painful solution but helps the pore man…at least to get away from the pain…

We also get to learn more about how life was for women in Mid-World during this time and about the women gunslingers that went under then name The Sisters of Oriza based on its founder Lady Oriza. Those of you that has read Wolves of the Calla will know parts of this story already but here it’s called Women of Mid-World and the cult of Oriza. We also get the first of a three part interview with Robin Furth.

As usually we get a very interesting issue. Well executed in every way. And personally I love it when they introduce new characters to the story and the introduction of Aileen Ritter really makes me want to know more about her…
Add or read comments 0 Comments
Close comments 0 Comments 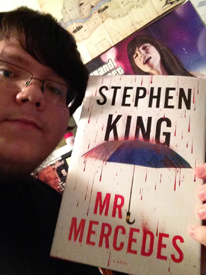