• The Shining (This one was actually cut while still at the theatre. Kubrick apparently thought it got a little too long)

• Creepshow (Contains five short films: Father's Day, The Lonesome Death Of Jordy Verrill, Something To Tide You Over, The Crate and They're Creeping Up On You. King's son, Joe plays Billy).

• Cujo
• The Dead Zone (One of the movies King supposedly is most happy with).
• Christine (Was originally going to be named "Outline").

• Children Of The Corn
• Firestarter

• Cat's Eye (Contains three short films: Quitter's, Inc., The Ledge and The General).
• Silver Bullet (Based on "Cycle Of The Werewolf").
• Stephen King's Nightshift Collection (Only released on video. It contained two, on some editions three short films: The Woman In The Room and The Boogeyman (based on stories with the same name in "Night Shift) and "Strangehold" (that has nothing to do with King)

• Creepshow 2 (Contains three short films: Old Chief Wood'n'head, The Raft and The Hitchiker).
• The Running Man (Very vaguely based on Bachman's book with the same name).

• The Cat From Hell (This short film was in the movie "Tales From The Darkside-The Movie").
• Graveyard Shift
• Misery

• The Lawnmower Man (King brought the makers of this movie to court for misusing his name, and won. No copy of the movie can have the line "Stephen King's" in the title).
• Sleepwalkers (This movie was written directly for the silver screen, not based on one of King's books).

• The Dark Half
• Needful Things (It was also released in a "directors cut" version that was 3 hours long. This version aired on TBS on May 22, 1996).

• The Mangler
• Dolores Claiborne
• Stephen King's Nightshift Collection (Only released on video. It contains two, on some editions three short films: Disciples Of The Crow (Based on " Children Of The Corn"), The Night Waiter and Killing Time (the last two has nothing to do with King))

• Thinner (Based on Bachman's book with the same name).

• Hearts in Atlantis (This one is based on 2 stories from the collection with the same name). 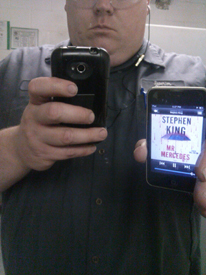