Filming of Mr Mercedes was done at Little Jack's on Wednesday.

The cozy throwback-themed restaurant had a new sign up reading "Demasio's Lunch + Dinner," which evokes images of family-owned Italian joint. (This is a hard boiled detective story, after all.)

The crews chose a good rainy day to shoot, since the set included spouts for staged rain. Props and lighting was also set up alongside the forthcoming Pancito and Lefty building.

Police directing traffic said that shooting was set to continue into late afternoon. Little Jack's Tavern said they were closed for today only for filming. 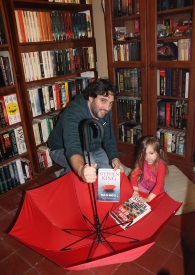