Elba as Roland, More Than a Rumor?

Looks like the casting of Idris Elba is a bit more solid than just a rumor. Akiva Goldsman, who is writing and producing the project, spoke to IGN at the 2016 winter Television Critics Association press tour while promoting his new WGN America series Underground.


"I think Idris Elba is the greatest possible idea for casting for Roland, and I'm unbelievably proud of it as a collaborator on this enterprise and because I think that he's a great actor and I couldn't be more thrilled that he is likely to play a part," Goldsman said. "I understand that people who are thoughtful about the storytelling and the racial politics of the storytelling might want to understand how that informs that storytelling, and I respect that and I hear that, and those things are not things we didn't think about or don't think about. The racist a--holes should go f--k themselves."

When asked to clarify whether changing the race of Roland was part of the initial conception of the movie or something that came about in the casting, Goldsman said,

"100 percent it was literally, entirely who do we think the best guy for the job is and can we get him. That was it."

"For me, casting is an extrapolation. As soon as you are having an actor play a character, whether they be living or fictional, it's different. Movies are not lives, movies are not books," he said. "I think what we do as filmmakers is we interpret, and you are welcome to agree with our interpretation at any turn, but I encourage you to do it based on thoughtful, aesthetic acceptance and open-heartedness and not bias."

My reactions from this is this:

1. Please don’t think that everyone that don’t want Elba as Roland are racists. I know I’m not.
2. The line "I think what we do as filmmakers is we interpret” is making me a bit worried that they might not follow the book as much as interpret the books. 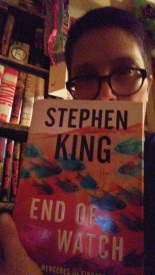