Latest on From a Buick 8

Here is the latest news about the movie version of From a Buick 8:


Bloody-Disgusting caught up with writer/actor Jonathan Schaech, who has two projects hitting DVD this week. Poker Club, which Schaech co-wrote with Richard Chizmar, and Rob Hall’s Laid to Rest, in which Schaech makes a brief cameo before being brutally offed, both hit DVD today. We’ll have more on those two projects later this week, but for now we’ve got an update on Schaech and Chizmar’s adaptation of Stephen King’s From a Buick 8 and word on another upcoming King project from the writing duo.

“The [BUICK 8] script is scarier than ever,” Schaech tells BD. “It's more of a horror film than the novel. King has granted us the right to make this version of the screenplay and he loves this one a lot more. He is very excited by it. We are hoping that it goes in front of the cameras in fall. I know that they’re out to a couple of actors now, Tobe [Hooper] is attached to direct. Hopefully I’ll get a part in it, but it doesn’t matter. They are going after really big names right now.”

“I will put my reputation on the line about the adaptation we just did. If King liked it, I feel like we can do no wrong.”

Unfortunately, the recent economic crisis is hitting film production pretty hard of late. Schaech admits that he thought the project was practically a done deal after getting King’s approval and signing on director Tobe Hooper. “That’s what we thought,” says Schaech, raising his voice and laughing.

“Nothing’s definite,” Schaech adds. “It's a shame, man. It would be so much fun to make that movie and everyone will love it, too. Its not an easy time right now to make any kind of film in the business. The economy is piss-poor and film production is down 57 percent. I hope that we can make the movie. We really need this chance. It will get made one day. I’m pretty certain of it.”

Although the financing is currently at a standstill, Schaech says the early prep work on the script and talks with Hooper have been very positive. “Working with Tobe has been such a gem. The guy knows horror. I’ve had fun trying to articulate what’s in his mind. Sometimes he can’t get it out as clearly as he would want, but eventually we got there. He’s very happy with what we’ve been able to do with this version. He’s excited.”

Horror fans have been quick to offer the actor-turned-writer advice upon the news that he was attached to the King adaptation. So far, he says he doesn’t mind. “A lot of the [fans] are really helpful. People are big King fans and I really respect that stuff. When we were adapting it, I was looking for hints of where everyone wanted us to go with it, stuff about other King adaptations and how far to go away from the book. As long as you make the decisions correctly, it will fit.”

Schaech and Chizmar are also closing in on another King adaptation. Schaech could reveal the lead, but not which King story the film will be based on. “We’re working with Sam Jackson on a Stephen King short story,” Schaech tells BD. “We [haven’t] cleared it through the studio yet. Once we do, there will be an announcement.” 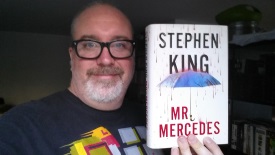