Here is a description of Blaze from Amazon/UK:


"At 6'7"and just under 300 lbs, Clay Blaisdell is one big mother, but his capers were just small-time until he met George Rackley. George introduced him to a hundred cons and one big idea: kidnapping the child of rich parents. The Gerards are filthy rich, and the last twig on the family tree could be worth millions. There's only one problem: by the time the deal goes down, the brains of the partnership is dead. Or is he? Now Blaze is running into the teeth of a howling storm and the cops are closing in. He's got a baby as a hostage, and the crime of the century just turned into a race against time in the white hell of the Maine woods." 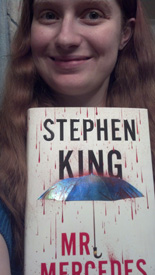