Eyes Of The Dragon Being Developed For Hulu

Deadline reports that Hulu have made a deal to develop a pilot based on Eyes of the Dragon.

Hulu has made a deal to develop a pilot based on the King novel Eyes of the Dragon, which was first published in 1984. Seth Grahame-Smith (Lego Batman Movie) writing the opening episode and serving as the showrunner. Fox 21 is the studio. Grahame and his KatzSmith partner David Katzenberg will be exec producers along with Bill Haber, Roy Lee and Jon Berg.

“I am so excited to be working in the world of Stephen King with with Hulu, which has such a terrific track record with Stephen King adaptations,” Grahame-Smith told Deadline. “The goal for this series is to feel unlike any Stephen King adaptation before, with this rich underlying source material, and the only true fantasy book he wrote that has kings and swords and princesses. We will honor the spirit of the book and the legacy.” 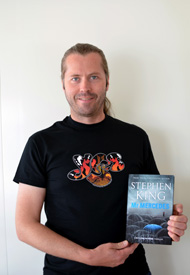