A somewhat sad update on The Dark Tower:


According to the Hollywood Reporter, Universal has dropped plans to start shooting the fall, as Goldsman is rewriting the script to reflect a lower budget. It hasn't been revealed how much lower the budget will be, or how that will affect the script, but it's still going to be a trilogy of movies and two TV series. Ron Howard is also still signed to direct the movie and the first episode of the TV show, with Brian Grazer producing and Goldsman writing all three movies.

The big question is whether this will affect the involvement of Javier Bardem, who signed on to play lead gunslinger Roland for at least the first movie and TV series back in April. 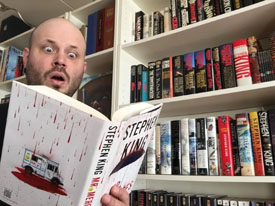