The Man who loved Flowers

A new Dollar Baby is in the making. Justin Zimmerman has gotten the OK from King to turn The Man who loved Flowers into a movie. Here is a report from The Athens News:


Zimmerman said he also has recently received permission to film ³The Man Who Loved Flowers,² a short story from ³Night Shift² by Stephen King. ³I figured if I¹m going to start off with a narrative film, it might as well be a Stephen King,² he said.

Zimmerman said he purchased the rights to the story and received permission to adapt and shoot the film, which will be a six- to seven-minute piece. He plans to begin shooting the film in Maine within the next couple of years, but said that many Ohio personnel will be involved in the process. More information about Zimmerman¹s work can be found at www.brickerdown.com.

Thanks to Bev Vincent.
Read all The Man Who Loved Flowers news
To the news archive 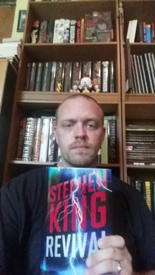