King, in a theater near you

Now you’ll be able to see King even if you can’t attend:

Here's an interesting option for people who can't make it to one of King's events this fall:

Co-Presented with BY Experience, Inc.

NEW YORK--(BUSINESS WIRE)--The New York Times announced today the launch of TimesTalks LIVE, broadcasts of intimate discussions with today’s top talents and thinkers from TheTimesCenter. The simulcasts will be transmitted live, in high definition via satellite to movie theaters and other venues across the United States and Canada. Approximately 75 locations will participate in the pilot screenings, which is co-presented with BY Experience with additional sites expected to join.

The participating sites, to date, include 54 Cineplex theaters throughout Canada and 20 independent venues in the U.S. including California, Connecticut, Massachusetts, Maine, Nebraska, New Mexico, New York, Oregon, Pennsylvania and Washington.

The first events to be broadcast will feature: John Irving in conversation with Times writer at large Charles McGrath, on Wednesday, Oct. 28; and Stephen King in conversation with Times book critic Janet Maslin on Tuesday, Nov. 10. Audiences at the various locations will have the opportunity to submit questions for consideration by the respective moderator in advance of each event through the TimesTalks Web site. For tickets, participating venues and theater box offices, please visit www.TimesTalks.com.


Read all Under the Dome news
To the news archive 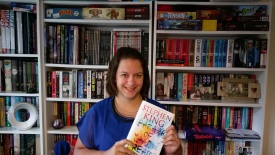